Oh my, our Camping Expedition, like the Three Stooges in action, we three girlfriends and our families. First there was tiny soft-spoken blonde Wrae, as “Larry” the voice of reason, then me a stocky misunderstood redhead playing “Curly”…and our tall type A, Evelyn as “Moe” the leader of the pack, and boy, was  Moe miffed! Ah, that camping trip, the first thing I remember is  little baby Gina’s toddling around the campsite in the early morning hours with a halo of curly blonde hair and her little pigtails all fuzzy and askew from sleep , eating  a jelly donut looking for all intents and purposes like a very tiny version of the “Amazing Bearded Bee Guy”. Scary…. 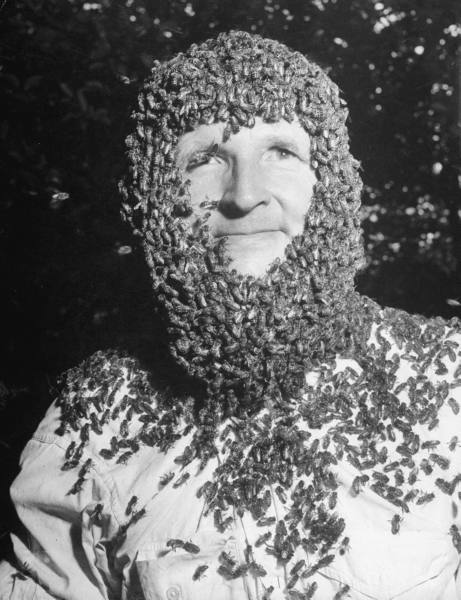 Jelly on her face and hands had attracted every bee  in the hive for five miles around, I swear.

We only noticed her remarkable appearance after an attempt of making coffee at the campsite had failed when Evie’s former husband somehow ticked her off enough that she took over the cooking duties and proceeded to pour the boiling water into the freeze-dried coffee jar. And then threw the jar at about 100 mph into the woods after burning her hand. That woman could have pitched for the Indians. What an arm.

It was all Wayne and I could do not to laugh but to remember to CHOOSE LIFE. Do not laugh at the lady who is trying to get you breakfast. There could be DIRE consequences. Try and stay kind. And you may eat. She had already displayed her rocket arm and I for one didn’t want to get in the way of it…no sir! That’s O.K. because Wayne and I were about to get our share of ribbing too. As the sun came up and adults and kids surfaced out of tents and cars and S.U.V.’s it turned out that Wayne’s gigunda tent, that he had insisted on getting (and not listening to Evelyn) all by himself was kind of like a kids overgrown pup tent. It was held up by a rope through the middle but had no flaps at the ends to close against the cool night air and wildlife. Wide open. Well about 3am some critter had the audacity to walk across his wife Wrae’s chest and while she was clearly not happy when they bedded down for the night in this open air beauty she “stood by her man”. Long about 3:01am she said, (a few things I can’t print here) “Enough of that noise!” grabbed her children and camped the rest of the night in the S.U.V. sans animal contact. Wayne, wasn’t invited. I don’t think he would have gone anyway…its another “Choose Life” moment. Here’s a picture as close to that tent as I could find. But it was about three times this size, huge and wide open. 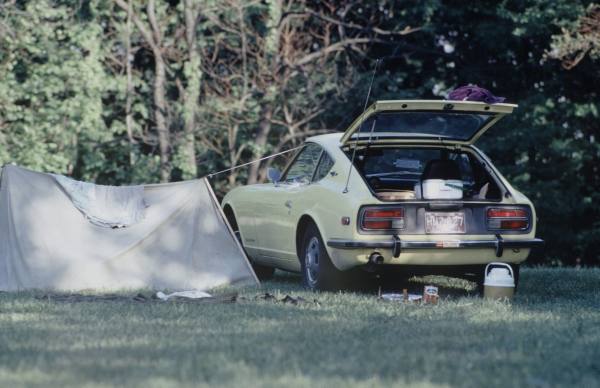 Back to that Gina baby…We all ran over her but Evelyn scooped her up first and gently swooshed all the bees away. She was fine. Evelyn’s heart was another matter. And I’m sure at this point the lovely tiny Wrae the first of our girlfriend triumvirate that went on this doomed Donner party escapade was about that time thinking…hmmm one kid bees, another kid poison ivy…doomed, doomed I say!

The trip had started with a brilliant conception of a family vacation every one could afford. We had all started out from Evelyn house in just two vehicles,Wrae’s SUV, and the Evelyn’s Van. My kids and I shuttled between the two all the way there. It was a fun ride going out and these two families were totally gracious and amazing in the stuff they had packed for the road. There was no need to stop for meals or refreshments because they had loaded cooler after cooler in their thoughtfulness. I just showed up with the kids and out sleeping bags and was treated to the best and funniest vacation we would ever have. We would have never been able to go without their help.

I can remember as the trip reached the halfway mark in getting to the Pennsylvania campground near Fort Ligonier, I switched into Wrae and Wayne’s S.U.V., and Wayne was driving and as I sat behind Wrae  I can still remember being startled when the first blast of grape juice hit the windshield. Wrae and Wayne roared…as Wayne hit the windshield fluid and wipers they guessed as to what flavor that latest dousing was. Evie, not realizing what she was doing had been emptying out the last dredges of the pop and juice cans ( she had 10 people in her van at that point!) out the window before she put them in the garbage bag trying to keep ahead of the flood of debris, not realizing it would splatter on the car behind her.

What started out just as a camping trip among friends and family became a proving ground for marriages and friendships. But there were looking back some hysterical consequences of our lack of camping skills. It was the Greys the Vince’s and us. The twins and myself, as the children’s father opting for survival decided wisely to stay out of it. He knew I wasn’t an “outdoor girl” and this could prove to be my downfall, it was. Years later the Vinces and the Greys would travel to the Carolinas together and form some more treasured memories, the kids and I missed that trip but maybe soon we can repeat one more family outing…now all the kids are grown and have twins and kids of their own. Maybe we’ll opt for the Holiday Inn in Ligonier this time! But you can’t beat the company!  And I can still see the little ones eyes wide open and amazed at “Storybook Forest”…

One response to “Camping catastrophes…and other true friendship trials”