Oh my God, I had forgotten how …

scared I was. How proud I felt, but mostly just the abject fear that she be alright. My beloved daughter gave me the most fabulous of presents, a gift of moments in precious time that we have shared that no one could ever take away. In amongst those tiny scrolls she recounted funny, sad, hysterical and profound memories we shared in this time and place. In one she had placed this memory,

” I remember that you came to watch me fly at BGSU. I was so proud to have you there. My Ma. ”

Then she drew a little smiley faced airplane, and rolled that little scroll up and tucked into that china box for me to find here today in the future and be thankful all over again that I have such a daughter, that has literally touched the sky.

She gets that courage from her Dad.I can remember when she told me she was going to take flying lessons. Her Dad had done the same thing in his youth, and over the years he flew less and less but the passion for the sky always stayed with him and he shared it with his kids. She has flown planes and her twin brother  jumps out of them. I am so proud of them but this stuff with planes just drove me crazy with worry for a while. Then suddenly one day Cas kind of stopped jumping out and Susan stopped flying away and it’s been calm about planes long enough that the sound of them doesn’t scare me anymore. I know their Dad is just so proud of them.  Susan’s ability to fly has him so proud of her accomplishment, and her brother’s nerves of steel to jump, I can’t even think about. They amaze me those two.

But I’ve got to tell you, it was one of the hardest things ever to see her take off in that little plane. I didn’t doubt her abilities, I just didn’t trust the plane, so I trusted God to look to the plane, silly, foolish maybe but there it is. At the end of the day you just need to show up and prove to the kids that your trust in their abilities and you both love and admire the strength of their choices. She did great.

A year or so after this adventure, my son told me he wanted to be 82nd Airborne. It wasa time for my son to take away my breath and he did. With his courage and strength and sheer guts. 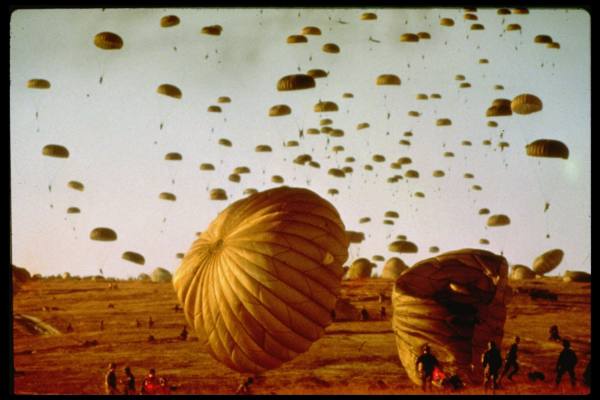 Jump out of perfectly good planes. I don’t understand why these kids have issues with planes. We never flew but once and then I had to order a double vodka and was so nervous I ended up trying to suck it up through a solid stir and threw it on my chest. O.K. well, after that performance maybe they just wanted to make sure they were more like their Dad than their scardy cat Ma. They are they both have spines of steel. And now my boy has his little ones all around him and Susan will someday too I hope, and I just want to say “Welcome to the future, and hold on…because if your kids are anything like you adventurers are (and they will be), it’ll be quite the ride.”

I love you guys, and being with you makes all the difference. Imagine…dropping out of the sky! Flying into the horizon…you guys take my breath away!