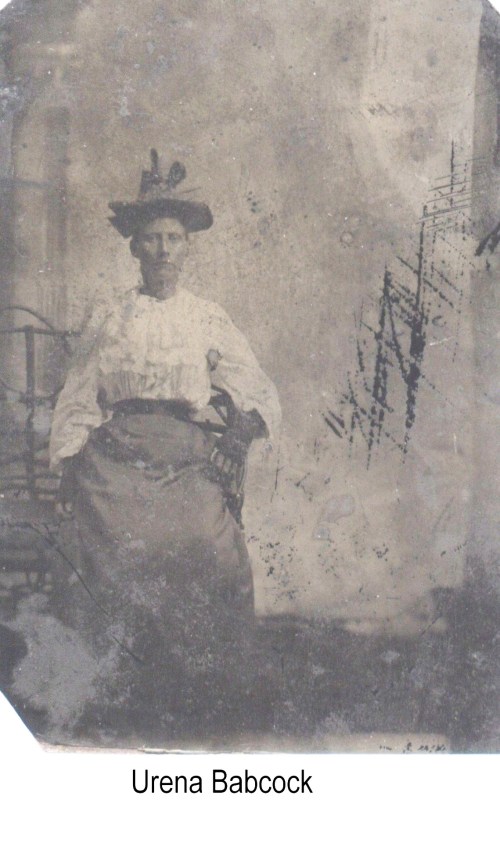 Her name was Urena Ticknor and she was born in 1859  just before the Civil War ( she would pass away in 1945), but when she was just a girl, she left West Springfield, Pennsylvania and her mother Harriet Robinson and ventured up to the Upper Peninsula of Michigan and worked as a cook in a Lumber Camp and met a trapper named Ruben DuBois they had a daughter Myrtle Winifred DuBois Dougherty…I don’t know if  Myrtle’s sister Alta McBean Aickins was issue of this union also or not.  All I know is family lore that says the marriage didn’t work and Urena (aka Irene) worked for a Attorney as a housekeeper for a time and he handled her divorce from Ruben Dubois.

I was reading the “Firelands Pioneer” October 1895 issue and found out that the name “DuBois” has an interesting history associated with it.

“The French scattered along the lake border, were there for the purpose of pushing the fur trade into the Indian territory, and except the commandants of the posts, were chiefly merchants engaged in this traffic. The  “coureurs des bois”, or “Rangers of the Woods”, were often half-breeds and were hardy and skilled in propelling the canoe, fishing, hunting, or sending a rifle ball into the “right eye” of the buffalo. they procured cargoes of furs from the Indians, and carried large packs of goods across portages in the interior, by straps suspended from their foreheads or shoulders. they were familiar with every rock and island, bay and shoal of these waters. The ordinary dress of a fur trader was a cloth fastened about the middle, a lose shirt, a blanket-coat, a red worsted or leather cap , and sometimes a surtout of coarse blue cloth, and a cap of the same material; elk skin trousers with seams adorned with fringe, a scarlet woolen sash tied round the waist, in which a broad hunting knife was stuck, and buck skin moccasins. In later years they wore a shirt of striped cotton, trousers of cloth or leather, leggings like the Indians, deer skin moccasins, colored belt of worsted, with knife and tobacco pouch, and blue woolen cap with red feather.

European goods were exchanged for pelts, which were taken to the depots on the lake and thence transported eastward. ”

Supposedly Urena’s mother “Harriet Robinson” of West Springfield was also Indian. So little tiny Grandma Urena Babcock who shoved a corn cob pipe into her apron pocket when she met my Dad could have been half  Indian and married a half Indian. No wonder Myrtle grew so tall and so strong.

I wonder also  if  Ruben’s talent’s with a rifle weren’t given to our Mom, and me and mine genetically?

Anyway she would eventually have 2 children, Girls who would give her grandchildren. 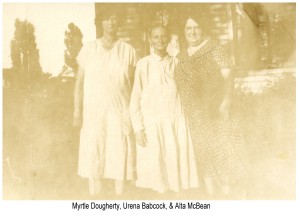 I don’t know what she did to earn a living but I do know she and my Great grandmother her daughter lived in a house on Van Epps Ave. in Geneva, Ohio.