That magical maniac, my brother Will… 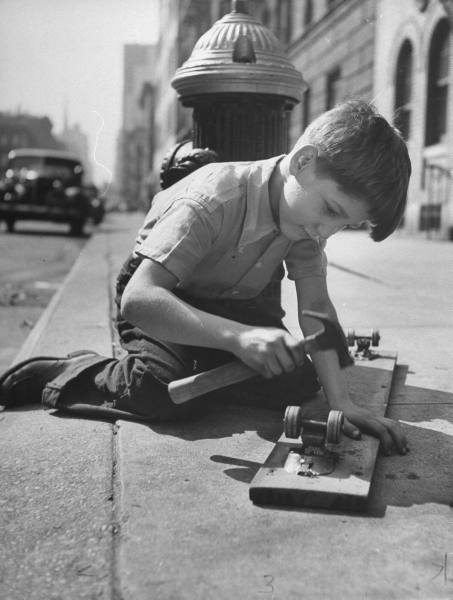 That little wonder, my sister Therese had a pair of old hand-me-down black leather boots. They had the most worn away bottoms ever. So smooth, you could fairly fly in them. One winter when the temperatures had finally dropped low enough long enough, my Magical Maniac of a brother Willy iced up the front walkway up to the house . Our tiny house on W114th street sat on a little rise, with short walkway that led to the sidewalk unless you were wearing those great boots and then those flying wonders led straight into the street and into Mr. Gallagher’s parked car. It was lovely.  I can still recall being amazed as that brother of mine raced through the house laughing hysterically, and carrying pot after pot of water, tossing it from the steps onto the ice and snow and trying to make a grand slide.(God help “Bullet” our 300 lb. mailman) My brother Will was a genius at making all sorts of amazing things. He was the first in the neighborhood to screw some casters onto a old box and then tear the box down to make  what is now known as a skateboard, except at that time (1962) nobody had skateboards except for my brilliant brother and whatever friends he made them for. Anyway, little did I know my brother was giving both my sister Therese and I lessons in skating and skiing and the wonders of both. They would not be lost on us. I can still close my eyes and as long as I imagine I’ve got Therese’s boots on…I’m flying, and forever grateful that if God was going to give me a brother like Will at least she saw fit to make him brilliant! Mean as a snake, but BRILLIANT. Maybe it was the disappointment of being the only boy in a family of nine. All I know is that when my Father picked my Mother and I up at the hospital after my birth (the sixth girl of seven so far children) my brother had cracked. He had taken drastic action. My Mother asked why Mary was wearing a knit cap on this warm October day, and when she took it off Mary’s head and was informed that my brother Will had cut off all her hair and she was to be called “Mike” from now on as far as Will was concerned. It was an attempt to create a brother of his own when he heard he had yet another newborn sister. The poor boy was sick to death of Sisters!